My thirty-year-old daughter is 5 months pregnant (with twins!) and I can’t help but relive my own pregnancy as she whines about the cumbersome tractor tire imprisoning her waistline. Outside of the wonder of creating life in the provenance of one’s belly, pregnancy engenders an urgent appreciation for the normal dimensions and mechanics of one’s body. Navigating the world with an extra 30-50 pounds of weight suddenly attached to your midsection makes you long to skip, jump, run, and dance to a degree not usually accessible when trying to build a routine exercise regime. My daughter swears that the first thing she’ll do after birthing The Guys (well, perhaps not the first thing….uncorking a bottle of champagne has been mentioned more than once) is slap on the spandex and begin moving vigorously in all directions. Shrinking back to fit within the outlines of one’s accustomed physical space almost overnight is, indeed, a giddy experience, one that can light a fire for intensive activity like nothing else.

Although I never considered myself overweight or awkward as a teenager or young adult, I was definitely not prone to running around with balls or sticks, migrating towards playing fields, joining teams, or sweating for pleasure. An athlete I was not, preferring the vistas made available through reading to the distant horizon of a finish line. But something about being dense and grounded by pregnancy propelled me into action once my daughter was born. I joined a gym (partly, I admit, because they offered free child care, a rare reprieve for a single, unemployed parent) and began the process of sculpting and toning muscles, building endurance, and inhabiting my own body in a manner I never had before. Because I was young and healthy and able to spend 2-3 hours a day working out, it did not take long to realize results. Within months I could do a strenuous aerobics class (oh the 80’s!,) lift weights for another hour, then wind up with a bout of intensive stretching before collecting the child and heading home. One Saturday morning, alone and on a whim, I ran ten miles just to see if could. (Although that was an isolated endeavor, folks; I never did have the stamina for enduring marathon-grade pain.) I felt glorious, distinctly remember appreciating the amazing capabilities of my body and promising myself never to let it slide back into lassitude and indolence again. Hah! 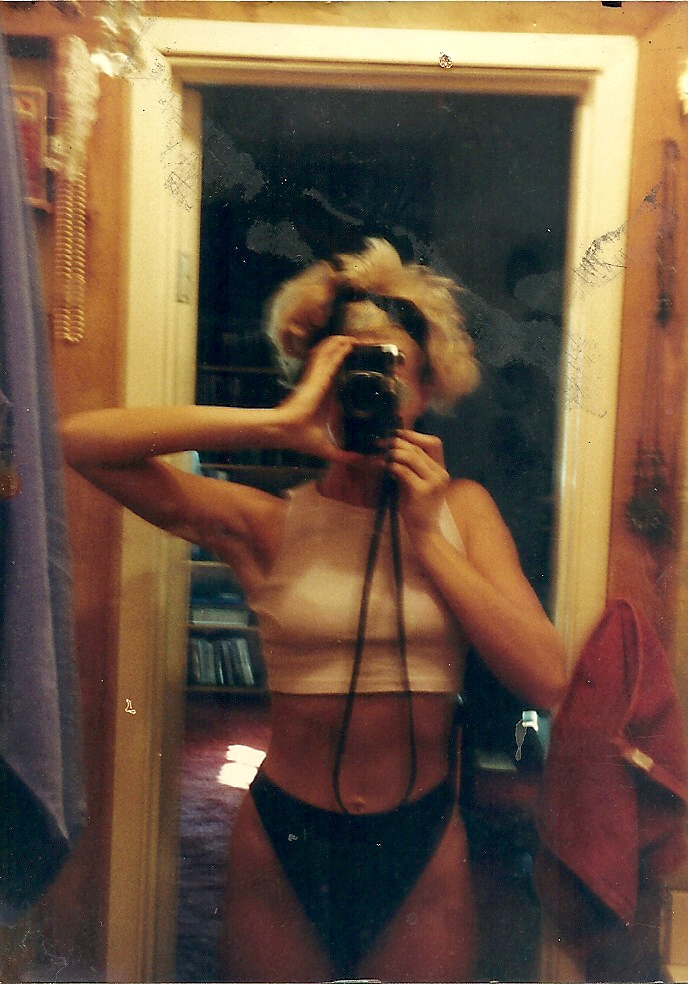 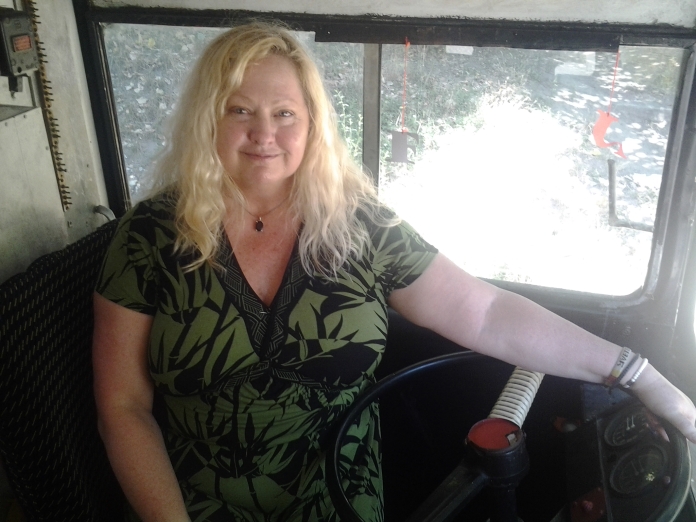 I present these two photos, taken some 25 years apart, as evidence of what happens when intention strays. That point in my life that allowed for daily hours-long workouts soon passed; I had a child to get off to school in the morning and a psychologically intense, emotionally-draining job that left me physically weary and more interested in accompanying co-workers to the bar than hitting the gym after work. Slowly, the weight crept on, not suddenly like pregnancy, but insidiously, over a long string of years, giving the lassitude and indolence firm purchase by the time I noticed the shapeless, plodding woman adjacent in the windows’ reflection was me. The accretion of pounds and loss of muscle accompanied the implacable vicissitudes of aging itself; the more weight padding my frame, the more recalcitrant my muscles, the heavier my bones, the stiffer my joints, the less likely I was to push myself through the interminable stretches of intense discomfort necessary to ameliorate the problem. Despite sporadic, albeit earnest, attempts to “get back in shape,” I was invariably defeated in the long run by my tendency to fall into books for pleasure, retreat to the kitchen for creative expression, and seek surcease of existential anxiety in the bottom of a wineglass. (For almost two decades, my husband’s and my primary recreational activity was restaurant dining.) By the time I was in my late 40’s I had all but given up. I did not have the energy or motivation needed to mount a campaign.

One of my fantasies of Peace Corps service was enforced starvation and exercise; I would return home after 27 months newly svelte from a dearth of edibles, desk chairs, and motorized vehicles. During the initial 3 months of training, forced to live with a Moldovan woman who subsisted largely on the abundance of her garden, slog up giant hills twice daily to language class, and endure the sweat bath of summer without air conditioning or fan, I did drop some 25 pounds with no forethought or planning. However, the minute I moved out on my own all hope was lost. (See above for the tendencies that perennially thwart me; surprisingly, those didn’t change with the geography.) I think I actually gained weight my last year, having befriended a group of hard-drinking, chain-smoking gourmands who introduced me to the burgeoning varieties of ethnic cuisine taking hold in Chisinau. (When $20 USD will buy you a 3 hour, five-course meal, with alcohol it’s hard to abstain.)

Now, weighing significantly more than I ever did pregnant, I find myself grounded in the Midwest, home base of the chronically obese, where there are more fast food restaurants per city block than telephone poles, gas stations, and grocery stores combined and lard is flavored twenty-nine ways and sold as a condiment. If one isn’t attentive it would be easy to collapse into the hammock of country fries and bacon grease. Alleviated from the time constraints of employment, isolated from the distractions of friends, family, and familiar territory, and suddenly attuned to the accelerating shrinkage of my lifeline, I am forcing myself to acknowledge that this is probably my final chance to recapture any vestige of the strength, flexibility and endurance that came so easily to me in my 20’s. Over the last six weeks of establishing a life here, I have pushed myself to incorporate incremental degrees of activity and allow longer stretches between alcoholic beverages and calorically-dense meals. Just today, focused on keeping the correct form while heaving barbells, I caught the faintest glimpse of the faded outlines of my long lost silhouette. For the first time in years, I allowed myself to believe it might actually still be in there, muffled by time and pounds and lethargy, but attainable if I keep myself on course.

Many of the Moldovans I know are rich in one regard: their daily lives generally incorporated a great deal of physical activity, from working in the garden to manual labor jobs to walking most everywhere they go.  Conversely, exercise is  something most Americans have to schedule into their day.  It’s one of the reasons I have been so loathe to seek employment now that I’m back: I dread sitting on my ass for eight hours every day

Realistically, any measure of success is a matter of years, not months, now and I will never have the lung power or joint support I took for granted in my 20s and 30s. But it’s starting to feel vaguely pleasant, rather than punishing, to be moving. I can climb the three floors to our apartment carrying bags of groceries without panting. I logged two miles in under 30 minutes yesterday (pathetic, I know, but more than I could do six weeks ago!)  I’m thinking when I arrive in California to help with The Guys I actually will have the stamina to do so.  Much like pregnancy, aging is a brilliant attention-getter.  It forces us to notice our bodies, to appreciate the freedom granted by mobility, the range of available activities that begin to narrow and slot one into the category of “old” if we let things slide.

I know I am nowhere near ready to be old.  Here’s to fifty fitness!