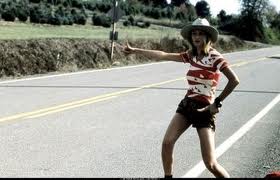 When I was 21 years old I lived with April on the beach at Mussel Shoals, just north of Ventura, California.  I can’t remember why we decided we were going to walk up Highway 1 all the way to her parents’ home in Sacramento – as I remember neither one of us had a car or very much money – but it didn’t take many miles to abandon any notion of completing the journey on foot.  (I think she developed a terrible toothache and it became imperative that we reach our destination quickly.)  Anyway, roundabout San Luis Obispo we stuck out our thumbs and it didn’t take long for a nice man to pull over and invite us into his van.

Now this was the early 80’s, when serial killers like William Bonin, the Zodiac Killer, Richard Ramirez, and Randy Kraft were out and about, conducting their grisly business.  The public was just becoming aware of the “dangers of hitchhiking,” but it was still a common enough practice that one didn’t need a cardboard sign, a camp chair, and two liters of water to wait out a lift.  Generally, if a female stuck out her thumb, she was going to get picked up.  And – lucky for us – the nice man took us home, let us shower, fed us, and refrained from assaulting us with anything more than a fatherly lecture on the potential pitfalls of two girls accepting rides in vans from strangers.  He then drove us to the southern terminal of BART where we bought tickets for the remainder of our journey.

And that was the last time I had hitchhiked.  Until I came to live in Moldova, that is, where hitchhiking is an integral and absolutely necessary aspect of the national transportation system.  I thought it was rather odd that – while PST was chock full of dire warnings about walking home alone after dark, or leaving a fellow volunteer alone in a bar, or smiling openly at men passing by – not much was said about the “dangers of hitchhiking.”  It was if there was a tacit understanding that anything said about it was useless and gratuitous.   Volunteers, just like everyone else in Moldova, are going to end up hitchhiking to get around; it’s a fact of life.

People in Moldova hitchhike because most of them don’t have cars, the rutieras are invariably jam packed, they stop every block to pick up and discharge passengers,  and they quit running  altogether between most points by 6:00 or 6:30 every evening.  If you don’t have two hours to waste making the 35 kilometer trip between Chișinău and Hîncești on a bus then you join the crowd standing out on the highway in front of the Gara de Sud and flag down a passing car to negotiate a ride.  Actually, you don’t even need to flag them down – cars pull up almost every minute offering empty seats to interested parties.

And what are the details of the transaction?

Well, strangely enough (for Americans at least) they aren’t worked out beforehand.  If a car stops and the driver is heading to the same destination you are, then you get in.  End of story.  Many times, not another word is exchanged.  (I know this from because Therry has picked up many a stray passenger during my various trips with him.)  When you reach your destination, you offer the driver some money.  The „acceptable” rate equates to what you would have paid on a rutiera.  But most people offer 1.5 to 2 times that amount.  Sometimes the driver accepts the entire amount, sometimes *he only accepts a portion, and sometimes he doesn’t accept any money (what????)

I have no clue what the subtext of the transaction might be.  Do some drivers never accept money?  Or do they accept it from people that seem like they have money and not from those who don’t?  Do they take it from men, but not from women?  Do they charge more for young people and less for old?  Perhaps they only take it when they’re low on petrol?  I will have to be better integrated to figure out this particular cultural puzzle, I guess.

What I do know is that it is a system that works and supplements the public transportation suprisingly well.  It makes not having a car a much more viable choice.  And Sissy Hankshaw was a damn fine character, after all.  America, you might want to rethink this option.  Really, serial killers are not that prevelant in the population and gas is not getting any cheaper…

And there are times when it can be a whole lot of fun.  Next post: last weekend’s rides with long distance truck drivers….. 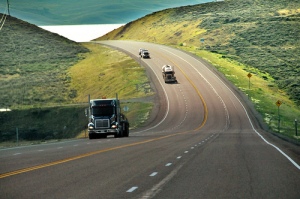 *Note the use of the pronoun „he” – I have ridden once in a car with a female driver (the wife of the English ambassador) and have seen exactly NO female rutiera drivers.  About one in 15 or 20 drivers on the street is female.  I think this is probably because driving is such an aggressive and extreme risk-taking endeavor here.  Most women are not in favor of causing gratuitous multi-vehicle pile ups and needless deaths just to establish their hormonal merits.