One of the distinct pleasures of living in Moldova – and I believe most of my M27 cohorts will agree on this one – was shopping at the Chișinău outdoor market, called the piața in Romanian (pronounced pee-aht-za.) The piața was located in the center of downtown, spreading across a couple of city blocks, pedestrian-only, no cars allowed. Here, one could find virtually anything from vegetables, fruits, meats, dairy products and fresh-baked bread to screwdrivers, sweatshirts, bicycle tires, alcohol, pet leashes, and laundry soap. There existed no map of vendors, though like items – such as clothing, hardware, and cleaning products – tended to be located in roughly the same areas. Initially, one had to rely on second-year volunteers to give directions (“turn left where the old Russian guy is selling radios, then go until you see the egg ladies, make a hard right and you’ll be in front of the fish place.”) Invariably, it was wall-to-wall shoppers: bunicăs hobbling in sturdy shoes, stabbing their canes ahead of them; wiry teenagers pushing carts laden with boxed produce pell-mell through the crowds, no regard for elbows or toes; fathers bearing small children aloft on shoulders; young fashionistas tilting along on impossibly high heels. It took me almost a year to familiarize myself with the varied wares hidden within its twisting, turning corridors and yet another one to have sufficient command of the language to negotiate a fair price and not automatically accept the (usually inflated) “American” price proffered to English-only speakers. During my third year food shopping became an almost daily task, not only due to the limited space in my pint-sized fridge, but largely because I welcomed the bustling, cacophonous counterpoint it provided to my otherwise calm and ordered existence. The morning dive into the piața’s seething sea of flesh and the contact it provided with those who brought the garden to my table was a definite high point of the day.

One of my intentions in making a transition to life back in the states was to continue this practice of walking to a local market to purchase the ingredients for my dinner. This quickly proved overly time-consuming, however; Irvine has a wealth of diverse shopping venues but it was built to support car-culture, not pedestrians seeking to tick off the day’s purchases in fewer than ten miles. Often, my list would contain items found only in specialty stores – Whole Foods or Mother’s or the Indian grocery, say – or bulk items that were most reasonably priced at Trader Joe’s or Costco. I would generally walk to one of these locations daily, but then spend another hour driving around in my car to all the other places. It was so easy to slip back into the habit of buying a week’s worth of food, sacrificing crispness in my vegetables or firmness in my fruit for the added time gained by not having to run around to four or five stores each day.

And then I got to Fairfield and met Jungle Jim. 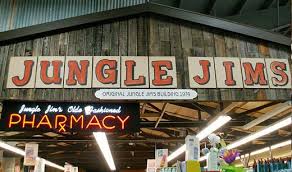 My husband had waxed rhapsodic about Jungle Jim’s International Market from the moment he discovered it a month or so after moving to Ohio. (I believe he actually chose his apartment based on its proximity to the store.) He was so enamored with its eclectic set-up and cornucopia of products that we soon jokingly began referring to it as ‘Church’ in our daily telephone calls, as in “I need to hang up now; I just drove into the parking lot of Church.” He went almost every day after work and would then call back to inform me about what spectacular cut of meat he’d scored or the marvelous discovery he had happened upon in the candy aisle (Presidential Pez-head dispensers, chocolate-covered crickets) or the offerings at the tasting bar (chocolate stout, sparkling pear wine) that evening. As the date of my move east approached, I began mapping out the locations of my favored markets and was horrified to learn that, not only were there no Trader’s Joe’s or Whole Food markets within walking distance, their closest outposts were some 20 miles south in Cincinnati. “Don’t worry,” he told me. “You’ll find everything you need at Jungle Jim’s.” Really? I found myself thinking. Do they even know what bulgur is in Ohio?

It stretches my descriptive powers to properly convey the circus-cum-carnival-meets-back-country-five-&-dime atmosphere of this place. Yes, indeed, there are life-sized, paper-mache giraffes, monkeys, flamingos, and elephants gathered to greet you where the waterfall dumps into penny-toss pool out front. Carousel? Check. Monorail? Check. Entertainment center regularly hosting comedy nights, wellness festivals and weddings? Uh-huh. In-store Starbucks, cigar-shop, toy store, cooking school? Yep, yep, yep and yep. Need to do some banking? No problem, in the store. Pharmacy? We got you covered. Post office? Need you ask? The average American supermarket stocks, on average, 47,000 products, most of which are produced by only a handful of food companies. Compare this to JJ’s website claim that they offer over 150,000 brands, 60,000 of which are produced by global manufacturers from Edinburgh to Istanbul. Seriously, you can buy a floor-sized hookah in the Middle Eastern aisle for $109. There is a 75 foot row of soy sauces – that’s it, just soy sauces. 180 different types of hot sauce. A three aisle section devoted entirely to cheese, It stocks one of the largest wine collections in the United States. (It has a hell of a lot of beer, too.) The store is 200,000 square feet and I think, just like the piața, it will take me a good year to learn all that it contains. (Who knows, there might be bicycle tires.) And it’s a ten minute walk from my front door.

Aisles and aisles of beer

To douse the firey hot sauces

Moldovans would love this!

My husband has actually met James O. Bonaminio, the eponymous originator of Jungle Jim’s. He encountered him in doctor’s scrubs at last year’s Beer Fest (“Is there a doctor in the house?” the overhead speakers would periodically announce,) but has run into him since working alongside stockers and checkers in jeans and tennies. In 2012 he opened a second location just outside of Cincinnati. I am tempted to ask if he’d franchise. I could see this making a hit in LA.

Ten years ago I never thought much about shopping for food; it was a chore that fit in somewhere between gassing up the car and dropping off the dry cleaning. But in the last couple of years it’s become a significant aspect of my day, something I view as one ingredient in a larger composition having to do with my health and well-being. Even before Moldova, I’d been conscious of the amount and type of food that I consume, the way it’s been grown and processed, how much packaging surrounds it. Then, shopping in the piața taught me how the very act of purchasing can differ from place to place, and that finding and selecting my ingredients can be a pleasurable task, rather than just another chore in my busy day. And now Ohio has gifted me an amusing, one-of-a-kind, wonderland of international, organic, farm-to-table, fresh caught, small-craft fare that provides me both a daily dose of happiness and a nice walk to boot. Who would’ve thought one could find such think outside a multi-chain corporate conglomerate?

And if any of you are interested in chocolate-covered insects, let me know. I can mail them to you right from the store.