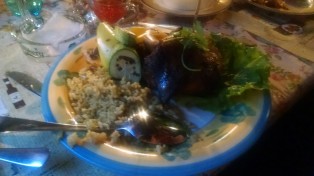 I love a good meal and tend to find myself in the company of those that do, too. Back in the States I was one of four women comprising “Table 41,” a monthly dining club that allowed me to sample high-end restaurants and top-tier chefs through the economy of paying only a quarter of the tab (unlike when my husband and I went out, say, and we had to foot the bill for both of us.) I have had the incredible luck of falling into another such group here in Chișinău and we have committed to visiting one of nicer, ethnic/cultural restaurants in the capital every weekend until my departure on September 2. Chișinău has changed just in the three years that I have been in Moldova, new restaurants seeming to pop up each month (including, just two weeks ago, Smokehouse, the first serving authentic American BBQ, opened by two of my good friends and fellow M27s, Matt Stahlman and David Smith.)

Nadejda, my counterpart at Novateca has been an angel to me in so many ways, not in the least for re-introducing me to Al and Uliana. I met them both briefly at an InterNations event, the monthly gathering of ex-pats in Chișinău, about a year and a half ago but only cemented our mutual admiration society upon running into them one night at Smokehouse when I was having dinner with Nadejda. Turns out Uliana and her have been friends for a decade (small world, truly, Moldova) and Al tutors Nadejda’s daughter in conversational English. Through the course of our exclamations over the exquisite experience of spice (something hard to come by in Moldovan dishes) we discovered ourselves all to be foodies and immediately decided to form a dinner club.

That’s how we found ourselves last weekend at Gok-Oguz, a Gaugazian place that has the ambiance of a country villa and the food to match. For those of you unfamiliar with the territory of Gaugaz, know that it is a “national-territorial autonomous unit” within Moldova populated by the descendants of Turks who migrated into the Balkans during the 13th century. So their food is a surprisingly delightful mix of Eastern Europe and Middle Eastern cuisine, with many dishes some permutation of lamb, rice, cabbage, onions, and other pickled vegetables. 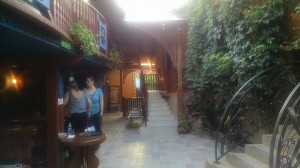 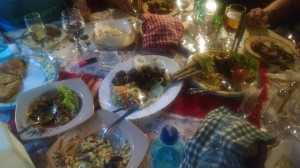 That’s Uliana on the left, Heidi, an M29 PCV in the middle, and Al on the right.  Heidi and I met, auspiciously, through my blog. She was living in NYC working at a boutique M&A firm, riding in the backs of town cars and traveling to Milan for work, when she messaged me, wanting some real time advice on Peace Corps service. And now here we are, two years hence, with her and I at the same table, and she scheduled to move into my old apartment and commence work on a marketing campaign for Neoumanist service tourism project this September. (Truly, it’s a small world after all!)

The next day, Sunday, Heidi and I explored The Yard Sale, a  flea-market-cum-food-truck experience that materializes monthly in a bohemian enclave hidden in the depths of a few twisting back alleyways in the middle of Chișinău. She and I had to keep shaking ourselves as it felt as if we had somehow been teleported to SoHo or WeHo – 90% of those in attendance could have been plucked from an American Apparel catalogue or blended into the crowd at Venice Beach. I don’t know where central casting found them, but they definitely weren’t the usual demographic shopping at Sun City or Malldova. Wildly colored hair, body piercings, elaborate tats and funky headgear all seemed de rigueur and for once my Vibram toe shoes didn’t feel out of place. I had an actual falafel, made from actual ground chickpeas (not a mix) that was de-lish and we sat and sipped sangria and people-watched, happily, for a couple of hours. 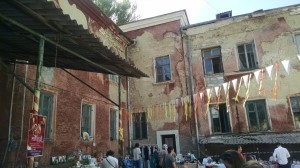 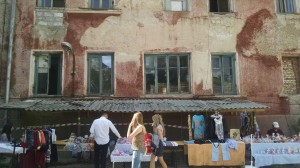 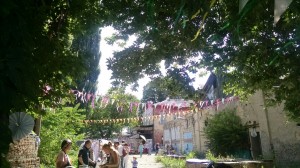 Hard to make out, but that’s a person inside the red hammock swinging out from the empty window frame in the middle right photo.  No safety net or helmet, folks, just family entertainment, Moldovan style!

And, heading out for a morning walk, just outside my front door, we find the cat coalition that lives beneath my building, swarming the walls and fences each time a person disturbs their rank.  There must be 30 or 40 of them, all ages, I swear.

During the morning walk, I pass by what I have dubbed the local haunted house. Since it doesn’t have a door, or windows, or much of a roof, I guess it’s really not much of a house, but sure looks creepy, right? 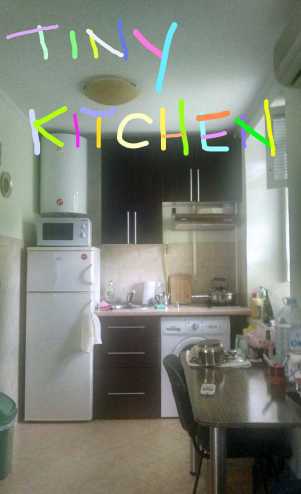 And, finally, my stab at living “tiny,” evidenced by the doll-sized kitchen in my AirBnb apartment.  I am enamored of the tiny house movement and find the smaller space quite navigable for preparing meals though perhaps not so sweet on storage….and I do miss having an oven.

Look for me here at least once a week through September 2 as I’m wrapping it up my time Moldova.  Life begins, again, anew.

6 thoughts on “Foodies, Funk, and Fun”