I’ve discovered over the past few days that my internet access at Nina’s home is intermittent and largely unpredictable.  Mostly, it seems to work best at 6:00am, a time when I am not feeling so inspired to blog.  So when I saw the bars appear in the lower left hand corner of the screen while I was conjugating my “to be’ verbs, I grabbed my computer and moved over to the corner of the room where the signal is the strongest.  I am madly trying to get photos uploaded before the signal disappears again…

So here is the classroom where I spend the majority of my mornings.  It’s actually quite pleasant (when it’s not a 100 degrees inside; Moldovans do not use air conditioning.)  There is a year round kindergarten in session downstairs so our studies are set to the lilting sounds of children laughing and playing.  Speaking of conjugating verbs.  Oh MY GOD.  Language lessons took a sudden jet-propelled thrust into DIFFICULT today: who in the world decided that substantive definite and substantive indefinite nouns should be modified differently?  According to whether they are male, female, singular, or plural? Can’t we just toss a “the” or “these” in front of them and be done with it???   And then conjugate the verbs and adjectives, too, accordingly?  I have lists two sheets long for conjugating just the male form of the verb “to be.”  This is crazy hard to keep straight in my head.

Today, for a bit more fun, I partnered up with Warren and Patty and we walked through our assigned quadrant of Stauceni to conduct our first experiment in “community mapping.” This is a tool we each will use at our assigned site for getting to know our community, its layout, socioeconomic and industrial composition, demographics, gender divisions and roles, etc.  We literally walked the streets using my iPad (ok – we’re so American) GPS mapping tool to find our way down to the winery, bus stations, altamenteri, lyceum, premir (mayoral) residence, where we then stood around taking pictures and writing down notes and generally looking like completely here from space tourists.  It was fun. 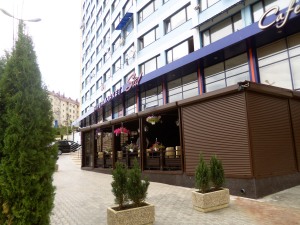 Then we went to the bar for a beer.  We all spend quite a bit of time at the bar, trying to cop an internet fix (free Wi-Fi) and sip our cheap ass beer as slowly as we can in order to hang out for hours without appearing to be loitering.  I tried buying a Perrier today because I thought it would look bad to get a beer for lunch, but it cost me 40 lei and a beer is only 15. Robyn bought a pot of tea and it was 25 lei.  It’s like they’re forcing us poor volunteers to consume alcohol…

Tomorrow, we’re off to Chisinau again in the spa bus to “team build” with the other volunteers in a park.  The weather shows thunderstorms, so this might be interesting as Moldovans don’t stop their activities just because of a little rain. ( I’ve seen blog pictures of picnics being conducted under hand held umbrellas.)

4 thoughts on “Not Much Time…”