As my day of departure draws near, almost every person I talk with poses some permutation of the question: Are you scared? (Nervous, anxious, worried, etc.) The first few times it was asked of me, I did stop and ponder my feelings.  Am I feeling fearful?  Perhaps the notion that I had to stop and think about it should have reinforced my impulsive desire to immediately blurt out, “No, of course not.”   Usually, being nervous or anxious or fearful or unsettled is a pervasive experience that informs one’s perception of the world, no matter that the cause of the feeling is not immediately present or active.  One doesn’t usually pause to consider one’s internal landscape when living in a war zone, even if the artillery fire is periodically silenced.  Or debate the fight or flight response that rises when the crackling of the undergrowth in a darkened forest might or might not signal a bear.  We usually feel what we feel without the interference of the parsing intellect.

But – being the liberally-educated progressive that I am – I have turned over that question enough times to have examined it thoroughly from all angles.  And I have concluded that, as usual, my first response is my best.  I am not scared. But it’s not because I am some extraordinary Indiana Jones-type adventurer, swashbuckling my way into unexplored territory with only a crumbling map coded in an exotic script to guide me.  I’m joining the Peace Corps, for heaven’s sake, an organization that has steadily expanded its global reach and supporting infrastructure since its inception in 1961 (the year I was born, by the way, a quirky coincidence that does not fail to delight me.)  In fact, I have never encountered a governmental agency more thorough, anticipatory, and communicative in the two decades I spent working at a non-profit, social service, government-contracting agency.  The Peace Corps should serve as a premier model of what government looks like when it works well, both for its constituents and its global neighbors.

Within an hour of sending my acceptance email (yes, folks, email – I didn’t have to fall back to a posted letter and suffer an interminable wait for a response,) I was deluged with information, from PDF booklets regarding safety and security, to detailed packing lists and links to discounting retailers, to an invitation to join a group Facebook account specifically created for the trainees departing for Moldova in June.  I have perused blogs written by current and past volunteers that describe some unexpected consequences of intimate encounters with locals; viewed detailed biopics of wintery living conditions and minimal household effects; absorbed unabashed confessionals regarding the starker realities of Peace Corps service; and been pleasantly surprised by the unexpected benefits of the outhouse. (Those of you interested in further reading can click here to gain access to literally thousands of postings by Peace Corps volunteers; you can sort by locations by clicking on the “Country” tab in the upper right.) I have reviewed hundreds of slide shows of the Moldovan countryside, host family homes, religious ceremonies and celebrations, community events, and volunteers downing beer in bars (reminding me of nothing so much as my Canyon Acres crew!)  An exhaustive political, geographic, and socio-political history of Moldova was provided via the Peace Corps Wiki. Honestly folks, I’m a bit embarrassed to admit that this experience has been more like preparing to move into the dorms of a liberal-arts hippie college where I will be studying the ennobling and salutary effects of cross-cultural immersion than going to serve an impoverished people in a backwater former Soviet state trying to fledge a capitalist economy.  (But then again, I’m not there yet…) 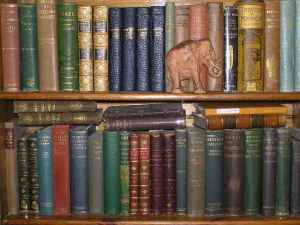 My thinking did lead me into a new appreciation for my particular background in literature, however, formed through an early propensity for reading that was passionately substantiated by a bachelor’s degree in English.  Reading is the primary tool that can be employed most anywhere (by those lucky enough to enjoy literacy) to traverse borders and barriers, to banish fear and apprehension.  The written word is a fabulous conveyance for time travel, geographic fluidity, and cultural transcendence.  The “I” of oneself melts and merges into the “I” of the writer as one accompanies her into foreign lands, samples exotic cuisines; participates in strange encounters and intimate trysts, navigates complex cultural strictures – all the while still residing in the commonality of human experience.  Reading is pleasurable because we DO share, at bottom, the same referents for evoking emotion and enlivening imagination.  We recognize each other as fellow human beings, despite differences in language, location, or lore.

Because I read, I have sobbed with grief accompanying the stoic soldier deployed into battle for the third time, shouldering his bag and turning his back on his family to walk the tarmac like a gangplank.  Here is principle: choosing a steadfast allegiance to an intangible ideal that could surely result in one’s untimely, grisly death over the comfort of home and the reassuring embrace of one’s spouse, partner, parents, children, or siblings. Because I read, my very bones have quaked in dread alongside the malnourished teenager as she gazes back upon the shore of her homeland receding on the horizon, knowing full well she will never set foot there again.  Here is bravery: abandoning all that one has known to traverse, alone, an open sea in a battered ship amongst a seething mass of human portage crammed in a stinking hold only to land on a distant continent where the language and customs and geography and people are completely foreign.  Because I read, I have known the crushing despair of those swept along a tide of war or drought or famine into refugee encampments, to remain stranded and homeless for countless years in the wastelands of arid deserts, windswept planos, or urban tenements.  Here is courage: continuing to live and breathe and raise children with grace and dignity and compassion beyond all rational hope for a better future.

Though some might think me principled, brave or courageous to have elected Peace Corps service, my experience, whatever ultimately it turns out to be, pales in comparison to so many hundreds of millions of others who have – whether by choice or circumstance – faced the unknown, the uncertain, the fearsome, the horrific, the dangerous.  What it comes down to for most people, I finally realized, is an overwhelming disinclination to willingly experience discomfort in order to expand one’s perspective or experience or knowledge.  It is the standard litany of routine amenities and accoutrements that people reference when vehemently explaining why they could NEVER do what I’m doing.  Will there be plumbing?  Television? Banks?  Restaurants? Ketchup?  (Really? You can’t do without a friggin’ condiment people???)

Perhaps that is why our military-industrial complex has been so frighteningly successful in gaining our acquiescence in waging a trillion dollar war on “terror.”  We’re so terrified of being inconvenienced.  Of having to squat instead of sit in splendor while shitting.  Of having to eat what’s grown in local soil rather than choosing from an array of out-of-season varietals and manufactured chemicals encased in plastic and cardboard. Of attuning our bodies to the rhythm and geography of the earth rather than relying on oil, electricity and GPS to propel and orient us. 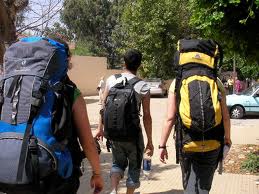 I know so many young people – I was one myself – who give themselves over, utterly and completely, to the siren call of distant places.  They don their backpacks, pocket their pennies, wave so long to their hometowns and hit the open road with passion and excitement and a belief in possibility that never fails to stun me into realizing how few of us retain that sense of adventure after age thirty or so.  Somehow “convenience” takes hold of us, siphoning our options for travel into the procrustean corridors of cruise ships, Marriot hotels, Tauk Tour buses and Club Med resorts.  Other countries become “foreign,” thereby strange, unpredictable, untrustworthy, and inherently scary.  The only way to circumvent our fears is by booking a protective layer of Americana into our plans – stay where they speak English, serve sirloin, provide bath towels, have ketchup.

If we could only acknowledge to ourselves and to each other what infinitesimal percentage of the world’s population enjoy the “conveniences” we have become so absolutely accustomed to, feel so irrevocably entitled to, and unequivocally unable to do without.  At what irredeemable cost to the environment, to human dignity, to equity and sustainability?  To compassion?

I hope the Peace Corps changes me. I hope it rids me of any vestiges of fear of what’s “foreign.” I want it to revivify my belief in possibility, my willingness to experience discomfort in pursuing community and empathy and an adventure-ready life.   And the people I hope to change, in return, are not the Moldovans.  They are my fellow Americans.  The one’s who can’t imagine life without ketchup, especially.  Perhaps if we could picture living without our every whim being immediately satisfied, we could begin to imagine a world where all children are fed, no one goes without water, people don’t die of malaria, polar bears continue to populate the ice floes which continue to drift through the Arctic Ocean while redwoods spread their benevolent branches into blue skies that teem with condors and pollen and bees.