My time in Moldova comes to an end in exactly two weeks. I’ve been busy packing suitcases to ship home; trekking overflow items to Peace Corps office for adoption by other volunteers; saying goodbye to friends and co-workers; visiting a variety of restaurants I had no idea existed here; solidifying plans for various journeys I’ll take in the next few months – in short, distracting myself from reflexively seeking to affirm that three years of service have generated some notable positive outcomes. In a word: success! A fellow M27 just sent me an email in which he observed that, though he left Moldova over a year ago, he has yet to reflect or even talk about his time in country. I understand perfectly; it is an experience that I did not imagine completely absorbing for years, maybe even decades. Perhaps it would coalesce into clarity only on my deathbed, I thought.

I was wrong. Because this: 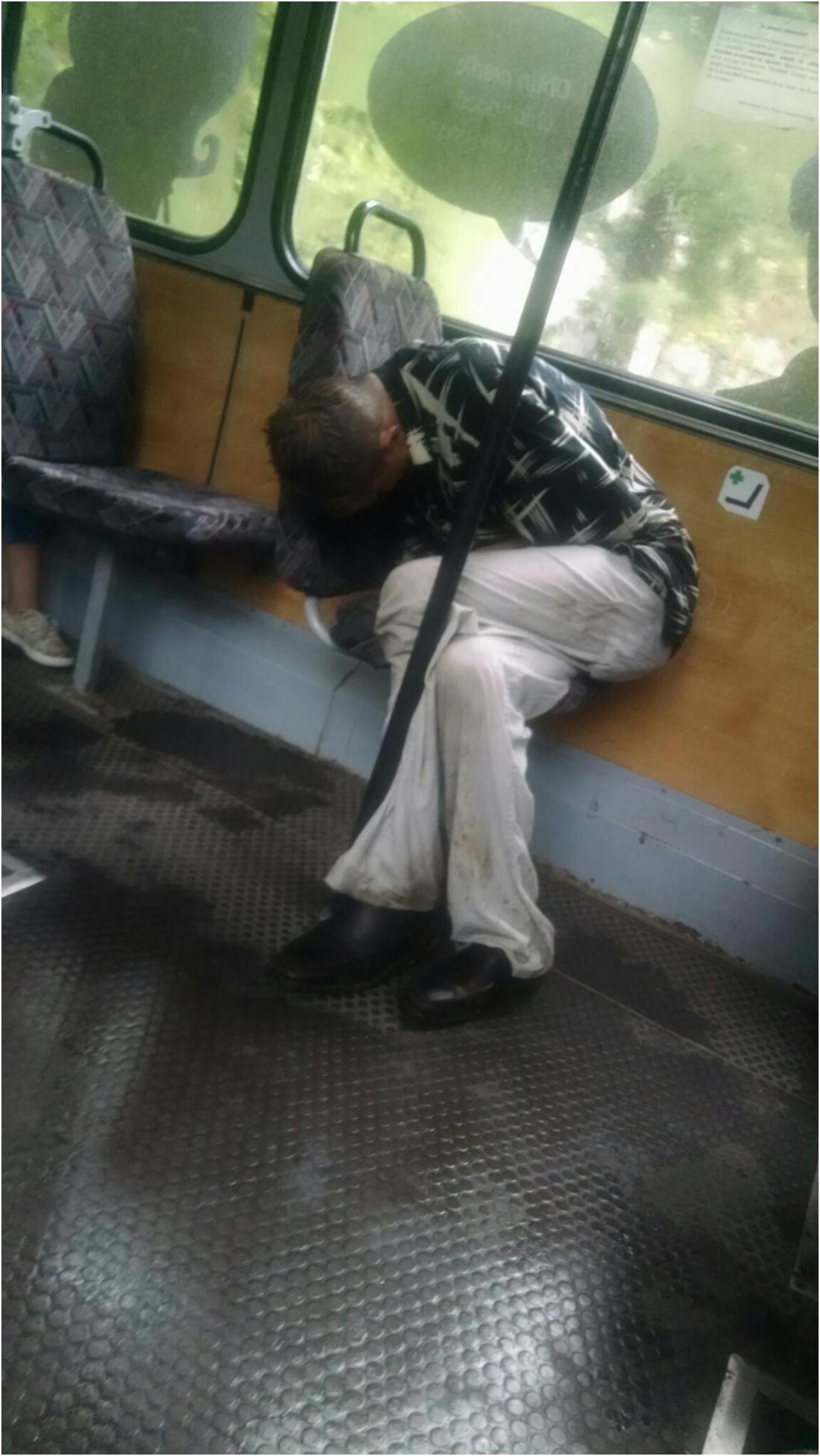 :I boarded a bus yesterday evening to go say goodbye to a couple of friends, a delightful couple with whom I made a memorable trip to Poland (you will always remember the people who walked beside you through Auschwitz.) I was pondering our respective next moves, marveling at the circumstances that brought us into each other’s orbit – them career State Department employees who routinely relocate to a different country every 2-3 years, me having made an impulsive leap out of 20+ years of suburban stasis – when I unwittingly sat down across from this guy pictured above. At first, he was reclining with his head back, eyes shut, legs stuck out straight, for all the world as if his seat was a poolside lounger. I assumed he was a commuter catching a quick nap on the way home. Caught in my reverie, I was barely taking in the cues: wet, mud stained trousers, oil-slicked hair, crispy, sunburned skin. I’ve been living here long enough that my surroundings have receded into a backdrop and no longer command the stage.

A couple of minutes into the ride, however, he reared up, gasping, and the abruptness of the movement caught my attention. At this point I was sitting directly across from him, our seats facing each other in that oddly forced intimacy so commonplace in Moldovan trolleys. Through a milky film that occluded both pupils, his eyes locked onto mine as if grasping for a fixed point on a distant horizon. Like a dashboard bobble, his head seemed only loosely connected to an insubstantial neck. He had a harelip and a badly running nose. His eyes kept shifted from my forehead to my nose, to my mouth, to my hair, then back to my eyes again, perhaps trying to integrate the disparate signals reaching his brain. Far inside those murky depths, I sensed a drowning intelligence, a mind still fighting to surface but destined to be overwhelmed, ultimately, by a raging sea. Then he pitched forward, clutched my hands and collapsed face first onto my lap. I could feel his snot penetrating my pants and the grit on his hands abrading mine.

“Nu, nu, nu,” I murmured softly, hoping not to attract attention. “Nyet.” I disentangled myself and crossed the aisle to another seat, whereupon he slid sideways into his own, sinking slowly, inexorably downward for the remainder of my journey.

I’ve encountered sufficient drunks to recognize the acidic stench of an alcohol stew; this man did not give off that smell. For the split second his face was buried in my crotch, I caught whiffs of grass and dirt and sweat and a distant, lingering memory of detergent from his shirt. No, he had the vague, un-sanitized aroma of the mentally ill or of someone, perhaps, in the final throes of a devastating illness.

It is in these situations when that worn-out, abused meme elbows its way to the forefront in my brain: What would Jesus do? Not because I’m a bible-thumping, holier-than-thou proselytizer, but because I find the model of Jesus’ life and his philosophy, even more so than Buddha’s or Mohammed’s or the Flying Spaghetti Monster’s, the ultimate ideal of human compassion, generosity, and unconditional love. As Stephen Colbert trenchantly observed:

If this is going to be a Christian nation that doesn’t help the poor, either we have to pretend that Jesus was just as selfish as we are, or we’ve got to acknowledge that He commanded us to love the poor and serve the needy without condition and then admit that we just don’t want to do it.

Now, granted, I was riding a bus in Moldova, not the US, and I have no idea what this man’s economic circumstances might actually be, but you get the picture. For all my aspirations toward idealism in joining the Peace Corps – living a more compassionate and caring existence, crossing cultural divides and viewing the world from a different perspective, appreciating the ties that bind us as a global family, yadayadayada – my instinctive response to the “poor” and “needy” when they face plant in my privates is to distance myself, cut away, feign ignorance. Please don’t snot or grime me. I don’t see you.

Although he was no longer aware of me, my gaze kept shifting back to him, a lone, crumpled assemblage of bones among upright rows of briefcase-toting professionals, young women reflecting themselves in mobile phones, grandmothers in shapeless housedresses, fathers holding babies.  Draped over the seatback and hand pole in a submissive posture of degradation and vulnerability, despite being clothed in what may have been, even recently, business casual dress and buffed leather shoes. What was his story? What had happened to him between womb and trolleybus? Where were his people – his parents, or siblings, or school mates, or friends? How had he been reduced from chubby-cheeked toddler to desperate adult, riding an endless bus to avoid the rain?  How indiscriminate, blind, the hand of fate?

I thought of the kids I had worked with for two decades back in California, foster youths, wards of the state, removed from dangerous or apathetic parents, trailing burgeoning files of nasty diagnoses: paranoid personality disorder, schizophrenia, psychosis, borderline personality disorder, anti-social/psychopathic tendency, etc., all usually stemming from the post-traumatic stress rooted in the horrific conditions and experiences of their pasts. And all I could do was get up and change seats.

It slammed into me then, that unsought assessment of what my time here has been worth, catching me unaware, unprotected against the futility and sadness of the epiphany. It is, indeed, a very small world. Six thousand miles and an intervening ocean don’t alter the face of the poor or the needy. It’s only the excuses that change. Back in the US, I had traversed the familiar stages of many a social work career, descending from occasional bouts of disenchantment to a more constant, simmering disgruntlement before landing in the bubbling cauldron of seething disillusionment. I was mad at office politics and national politics, city government and non-profit boards; frustrated by the blatant materialism encouraged in our clients to distract them from the challenges of their circumstances; anguished by the generational abuse I stayed long enough to witness, deeply defensive about the pervasive obstacles I viewed as outside my control.

The notion of Peace Corps – overseas service, a change of scenery, escape from the whirlpool of my cynicism – became the saving grace to which I pinned my faltering notions of what ‘being the change’ I wanted to see in the world really meant. I was going to make a difference. Again, at last, finally.

But what truth  I finally allowed admission here – one not endemic to the Republic of Moldova, but to most nations and most people, and, most painfully, within myself.  In both the villages and the capital, during training and throughout an extended third year, among other PCVs and ex-pats who had come to serve the needy, through a slew of projects and initiatives that purport to foster sustainable change, I encountered a new cornucopia of excuses, reasons why we failed.  And I suddenly realized that there will forever be excuses, we have two thousand years’ worth of reasons why we fail, justifications for why one can’t fit that huge, hairy camel through that ridiculously microscopic needle’s eye.  How prostitute’s feet have been shown to carry disease.  And how impossible it is to throw the moneychangers from the temple once they’ve got the keys. After all, Jesus was a special case, right?  And – even though the United States has cast itself in the role of world savior, a “Christian” nation that touts the four gospels of freedom, equality, opportunity and democracy – it has it’s own citizens safety to prioritize and ensure, doesn’t it.  And surely I cannot not be blamed for avoiding potential contagions or possible threats to my personal integrity, can I?

Please. Scroll up. Read Colbert’s quote a second time.  Spend a sobering 15 minutes seriously pondering the tableau of humanity above, as I did on that bus ride last night to visit those lovely friends who pondered the piled luggage and shorn hair and abandoned eyeglasses and moldering shoes alongside me at Auschwitz. Who spent a solemn three minutes inside a gas chamber, wondering how it happened.

An hour after this experience I was wolfing down a tender brisket, fried okra, baked beans and mac-and-cheese, some of the definitive staples of America’s Southern hospitality. A day later, I’m still doing my damnedest to digest that gluttonous feast, to shut him out, close my eyes, file through the myriad reasons I’m not to blame. But damn if he doesn’t keep thrusting out an intruding hand, chipping away at the glow of my final days, calling into question every moment of the past three years.

Leaving me with just one word: Nyet.